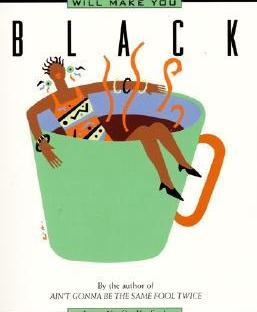 I’ve written before about how growing up, I was not happy with being black. When I look back on how I thought of myself and the messages I internalized, I am sad and ashamed. Occasionally, I may revert to those awful thoughts, but it’s gotten a lot better.

It’s funny (it’s actually not funny). As I was reading Coffee Will Make You Black by April Sinclair, I remember all of the little myths and insults about being black that were mentioned in the book. The funny part (the not funny part) is that this book was written in the 90s and set in the 60s, the height of two black empowerment eras (in my opinion), but as I was growing up (granted, it was in the late 90s and early 00s), people still used these myths and insults unironically.

I remember growing and hearing warnings from my mom telling me not to stay out in the sun too long or I’ll get black, as black as my dark-skinned grandpa. That was the worst thing that could happen. I remember my mom telling me to pinch my nose so it wouldn’t get big. I remember using skin lightning lotion as a kid as young as 9. My mom even told me not to marry a man too dark because I need to think about how my children will turn out.

The mom in the novel perpetuated a lot of this stuff to her daughter. But I understand these mothers. The mother in the book was bullied and her way out was to try to be as white as she possibly could. As far as my own mother, she would have been growing up a little after the time the main character was growing up. My mother is just as much a product of her upbringing and passing these messages to her children was inevitable.

I understand these mothers. If you believe Darwinism translates to humans (which I don’t agree), survival of the fittest tells us to fit the whiteness mold, and passing this message to your children will better ensure passing down your genes and making them stronger.

You want to know what makes it harder for a little black girl growing up besides having to go these extra lengths to feel beautiful? Not learning what the heck is going on with their bodies.

Learning about things from friends is fun, but I also need some accurate information. My coworker once told me that at her high school, there was a belief that penetration counted in the armpit… And that’s what it meant if a girl shaved…

And then these kids become adults and screw up with unplanned pregnancies and infections (not that any infections are planned. I’m just trying to get better at not demonizing STIs as dirty. If they’re treatable, then it’s no different than getting strep, except, ya know, it’s on your genitals).

Contrary to belief, having open and honest conversations about sex and bodies will not encourage kids to go out and do the sex with a bunch of people. And scaring kids into not having sex doesn’t work either. Drinking coffee won’t make you womanish (or ‘umlish as my grandmother and mother used to say. They also said it made your, as in only little girls, panties stank…).

I couldn’t imagine trying to go through the already dreadful process of puberty with all this extraness added. Oh wait, I was a black girl.

What things were you told (or not told) that made coming-of-age even more difficult?

How my Friday night is about to go...
Happy #WorldBookDay!
My February Wrap-Up!⁠
✨ANNOUNCEMENT✨⁠
My first Book Tok 🤣
Another local thrift store find on #ThriftyThursday!⁠