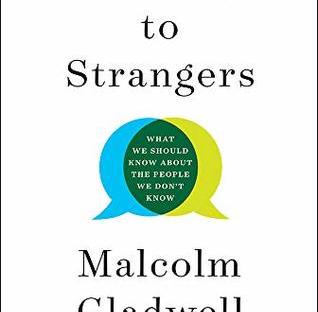 Talking To Strangers: What We Should Know about the People We Don’t Know by Malcolm Gladwell was an interesting listen. Like Malcolm said, it sounded like one of his well-produced podcast episodes. And I thought I was impressed by Let Love Have the Last Word!

Malcolm Gladwell fails to surprise me. Well, when I first read him in high school and didn’t yet learn to appreciate his twists and turns eventually getting him to his point. I think I like his method of arguments is fascinating to me because I really like plot twists in fiction. When he makes all of these seemingly unrelated points come together in the end, it almost feels like he’s using plot twists.

Before I got my hands on this book (well I didn’t physically have the book), I saw lots of reviews and headlines that talked about this being one of Malcolm’s most contentious works to date. I couldn’t believe Malcolm was even capable of writing something contentious.

Then the book opened with talking about Sandra Bland. I got excited that Malcolm was venturing into this territory and I couldn’t wait to see what ride he was about to take me on. It thrilled me to see the possibility of a naughty, boat-rocking Malcolm.

I got my hopes up too much.

I did learn about helpful concepts about the human condition when talking to strangers. It’s not like I outwardly disagreed with anything he was saying. I just wished he would have chosen a different topic to frame his book around.

I think I was disappointed by the lack of responsibility assigned to systems of oppression and how they operated in Sandra Bland’s case or in some of the other examples he used (don’t get me started on that campus rape section. That’s my whole work life and I was very upset that he reduced the epidemic of campus sexual assaults to misunderstandings between two people. THAT’S NOT WHAT THE PROBLEM IS). He talks a little about racism, but very briefly. Yes, there is a lot of room in these scenarios that are attributed to human error, but those human errors are also part of perpetuating systems of oppression.

I was also disappointed at the quick acceptance of suicide as an explanation of Sandra Bland’s death. He had a whole chapter about suicide and context, and he didn’t make any connections whatsoever to that content. It almost seemed as if he had to rush the ending of his book.

And I will give Malcolm some credit. He made a bold and important choice to frame his book around the death of Sandra Bland. He could have picked a police interaction with one of the many black men who died during those interactions. He could have chosen a scenario not related to anything calling for social justice. Everyone is at different places when it comes to their journey for social liberation.

While I do wish this concept wasn’t so watered down, I will accept it if this is what it takes to engage white people a little at a time on this topic. I am grateful for Malcolm for using his platform to expose mainstream audiences to these topics and have them think differently about them.

If you’ve read Talking with Strangers, what did you think about it? Let me know in the comments!