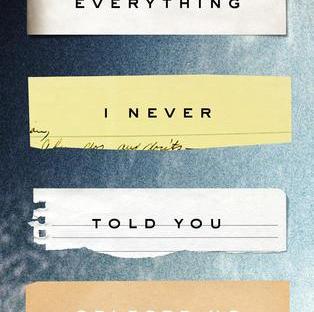 As this year is coming to a close (actually this decade. Dang!), I am reflecting on second chances and growing from the past, not burying it. Some major themes in Everything I Never Told You by Celeste Ng was second chances, especially the lack of second chances you get to treat the people you love how you should treat them, and covering wounds without tending them will only make them fester.

In the Lee family, Lydia becomes the favorite child (which is strange because aren’t the middle kids supposed to be forgotten?). And then her body is found at the bottom of the lake. It’s one thing to stand out as the only Chinese American family in an all-white community in the 70s, but to have your family shaken to the core from a tragedy such as this is traumatic.

Marilyn and James, Lydia’s parents, found a bond out of tenuous circumstances. Marilyn wanted James because he stood out for being Chinese; James wanted Marilyn because she was so conventionally white and blended in. A whirl-wind love story, am I right? On their wedding day, Marilyn’s mother told her that this union would never work, and their marriage was from then on haunted, as James overhears these words.

Many instances of miscommunication occur, and people take frustration out on the people they supposedly care about in a way that perpetuates hurt in this family. In the midst of it all is poor Hannah, the third child, who is overlooked and forgotten (like a true middle child).

If I can take a digression here and say that I am strictly referring to stereotypes of middle children. Many parents do a great job at showing each of their children affection equally. Sometimes, it does happen to be the oldest or youngest who seem to always get the short end of the stick (I have no idea where this expression came from and I find it weird). Sometimes there are way more than three kids or there are blended families and birth order theories do not fit neatly in birth order theory. I wanted to give this disclaimer because someone once got offended in my grad school cohort for someone using the term “red-headed step-child” (and took it way too far and compared it to using the N-word. People with red hair have never been systematically oppressed because of the color of their hair, so sit down somewhere).

Back to the topic (*J. Cole voice*). The Lee family thought this arrangement was working for them, but it took this tragedy for them to see how they were really treating each other. While it was too late to do better with the child they lost, they could start fresh with each other, especially the daughter that was left behind.

Regrets may happen in our lives, but every new day we wake up is a second chance. After reading this book, I wanted to make sure I treated every day as a second chance, but more importantly, a chance to do it right the first time.

So, as we go into this new decade (wow…), make a promise to yourself to treat people well the first time. If not, use tomorrow as your second chance and don’t let it pass you by.

✨Pretty for a Book Girl✨⁠
My April box from @feministbookclubbox 🤩⁠
Interview with the Vampire thoughts 🤔⁠
Our new design this month for Earth Day! I’m a book lover and a plant parent, so I wanted to create a design that spoke to my love of growth. I love watching my plants grow, and I love looking back over my reading journal and blog posts to see how books have made me grow! 🌱
Pride and Prejudice ✨⁠
Happy Easter Christian friends (and those who celebrate it secularly)! And happy belated Passover to my Jewish friends!