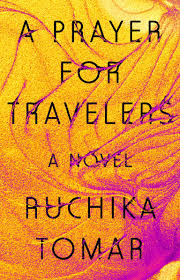 I just finished the book A Prayer for Travelers by Ruchika Tomar . How do I feel about it?

I feel like once again, this book was weird. But you know how I like weird books and stories. It was definitely one of those white woman thrillers that I talked about in the past, but with a splash of a Latinx twist (the newest La Croix flavor).

I also really liked the structure of the book. It was written like a collage, all out of order but the pieces came together in a way that makes sense. Even the chapters were out order. I thought this was an interesting new twist that I have never encountered in a book before.

And yeah, I’ve read books that flash back and forth from the past to the present. Usually they indicate date or say then and now. This book was like “I am literally out of order and you are supposed to read me as such”. That was so fascinating to me!

There were also some visual elements mixed in but, lol, I couldn’t see them because I was listening to the audiobook. I’m sure they were cool and made things make more sense. And technically I could have seen them with the attached PDF, but I was too lazy to download it (yes, I am that lazy). I guess I’ll never know what pieces those visuals filled in.

At first, I couldn’t tell what era this book took place in. I have read few books set in the desert and it seems just as rural and poor as the south or the mountains or middle America. People ate in diners and didn’t have cell phones and drove old cars. It wasn’t until the end when one of the characters said “why didn’t you just drop a pin” when I realized that this book was more contemporary than I thought it was.

Something I have learned from reading books this year is opening my eyes to different kinds of poor than I am used to thinking about. I read a different book earlier this year called Heartland: A Memoir of Working Hard and Being Broke in the Richest Country on Earth by Sarah Smarsh. This was a memoir about a girl growing up in rural Kansas. I think about “the country” but it’s usually in the context of people living in the South; I am just as guilty of thinking of the states in the middle of the country as flyover states. Like, when do I ever think about Nebraska??? I don’t even think I’ve met a person from there.

I’ve read books set in Nevada, but they were in Vegas or Reno or maybe a ranch. They definitely weren’t in a small desert town only truckers pass through. Usually these places are side characters, only featured for a blip to add adventure to the story. And the town, and the other towns like it, in this book acted more as a character, rather than just the setting. It was living and breathing in the story.

These places may not have a lot to offer, and the people in these towns may even have minds as small as their geographical location (a possibility, not a generalization), but that doesn’t mean these places and these people should be forgotten. They all are living and breathing and deserve respect too.

What are some books set in small towns that you enjoy?