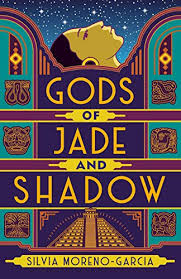 It’s Hispanic Heritage Month and I read Gods of Jade and Shadow by Silvia Moreno-Garcia just as it kicked off. It was a great book for the occasion. I was taken on a journey through Mexico and learned some Mexican mythology.

I really don’t know what else to say about this book. I mean, it was good for the time of year, but was it really good? It definitely wasn’t bad. I gave it a solid three stars on Good Reads. I usually don’t read fantasy or mythology books, so it was good enough for me to finish strong and stay interested.

There was just something missing from it and I can’t name what it was. Maybe it wasn’t fantastical enough for the circumstances. After all it was a story about a girl traveling with a god. No, I don’t think that was it.

Or maybe there was something lacking in the love story. Yes, I think that’s what it was. I think the love story in general was misplaced. The entire book was spent building up this strong female character, set in the backdrop of the flappers of the time. Casiopea was a hero and exhibited bravery and strength that she had no idea she possessed. To me, that seemed interesting enough.

But of course there had to be a love story (and I won’t tell you the fate of the lovers in the end), there always has to be a love story. I mean, what else would keep me watching action movies as a woman (this is a serious question. I’ve also been socialized to not like action movies unless there is some sort of attractive lead character-man or woman for me, tbh– or a love story)?

Actually, sometimes a love plot is unnecessary. Casiopea could have JUST been a strong character on a journey of self-discovery and adventure. She didn’t really have to fall in love on the way. She didn’t need a man to make her great.

Ok, I’ll give a light spoiler, because it’s kinda difficult to talk about the love story without talking about who Casiopea falls in love with. She falls in love with *whispers* Hun-Kame, the god of death. I get it. This plot device is also supposed to show the evolution and humanity of a god, but they honestly could have just been good friends and it would have accomplished the same goal.

Love is the great equalizer; we all want to love and give love (well those of us who aren’t sociopaths or liars). People have been telling stories about love forever. A love story will always be interesting to me.

At the same time, friendship is also a love story. And sometimes that’s the level a relationship needs to stay. After all, it is possible for men and women to just be friends.

Although, I would not have been mad if there was a sexy scene (or a few) since there had to be a love plot.

Are there any other books you can think of that have unnecessary love plots? Let me know in the comments!

An Asian and Pacific Islander #ThriftyThursday
Hey everyone!
New design alert 🚨
On falling apart...
Let’s make a movement!
A #tbt and #thriftythursday post all in one!⁠